Why You Need a Letter of Demand 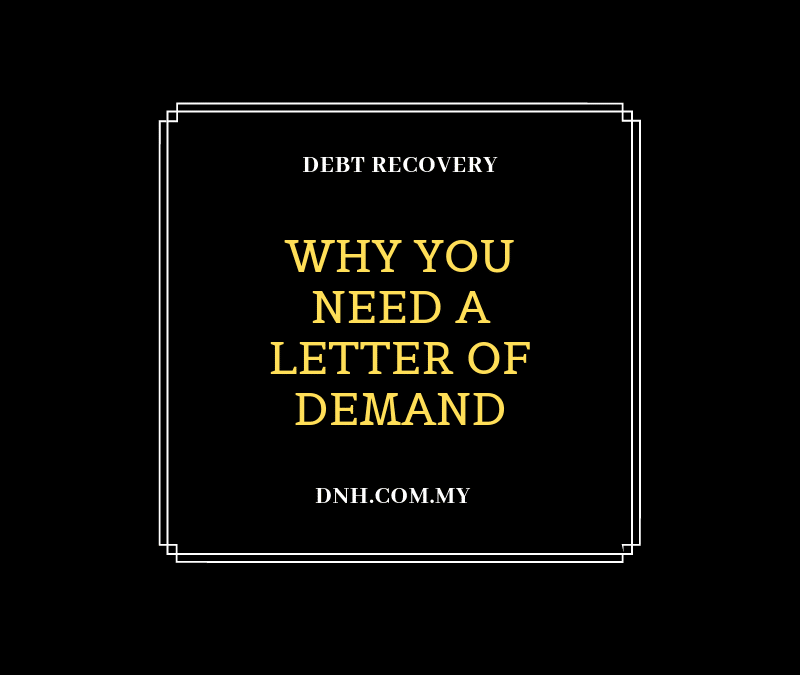 In any dispute (especially those involving unpaid debts), lawyers would normally advise a client to first issue a “letter of demand” (usually referred to as an “LOD”). A letter of demand is a letter which establishes the background facts and records your demands.

For example, if your tenant A owes you unpaid rental for 6 months, you can issue a letter of demand to A to set out how much is owing, and demand for payment.

• The relationship between the creditor and debtor;

• How was the relationship built;

• The debtor’s breaches / wrongful acts; and

• The amount owed (including interests / costs where appropriate);

Sometimes, a letter of demand is issued to gauge how the debtor would respond i.e. if he is disputing the debt, what are his reasons for doing so.  This will also give you an idea as to what is the likely defence that will be raised by the debtor in the event of a legal suit, which will allow you to assess your chances of success if a claim is filed. This will allow the creditor to strategically prepare for what to expect next and to structure his case better if the dispute goes to court.

The term “everything must be in black and white” means you should always have a record of material events as good corporate governance. When the letter of demand is issued, it will serve as a record of the ongoing dispute. For example, by reading the letter of demand, one would be able to quickly ascertain the background facts and the amount outstanding, compared to if one has to sort through invoices and other accounting documents to piece together the story of the debt. This would be especially useful if the key personnel in the company / business has left; keeping proper documentation will make things easier in the long run.

Remember: a letter of demand does not necessarily have to be issued through a law firm’s letterhead.  It is perfectly acceptable to issue a letter of demand on your own company letterhead.  Of course, it is advisable to get a professional to vet through your letters before issuing, especially if there is a potential that a matter could be escalated to the Court.

About the author: Zi-Han Lim is an associate in the dispute resolution practice group at Donovan & Ho. He is experienced in dispute resolution, focusing on employment and industrial relations, administrative law and commercial litigation.

Donovan & Ho is a law firm in Kuala Lumpur, Malaysia. Our practice areas include employment law, dispute resolution (litigation and arbitration), corporate and tax advisory, and real estate/conveyancing. Have a query? Contact us.

Does your Contract need to be Signed?
5 Things You Should Know about Strata Home Ownership
Share this article: