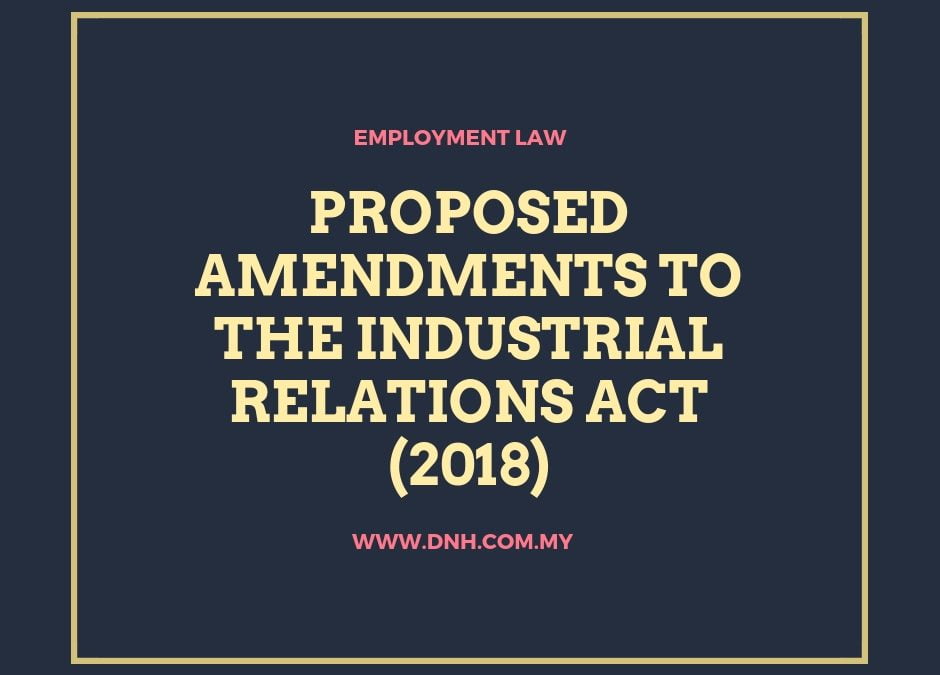 In keeping with the Ministry of Human Resources’ (“Ministry”) policy to review and reform the employment landscape in Malaysia, the Ministry has been proposing several amendments to a number of employment related laws, namely: the Employment Act 1950, Trade Union Act 1959, and Industrial Relations Act 1967. In this article, we will focus on the recent proposed amendments to the Industrial Relations Act 1967 and highlight some key changes to the act. Note that the discussion here will be based on the amendments published by the Ministry as at 4.12.2018 and may not address any new changes that may be proposed subsequent to the date of this article.

There are new provisions being proposed to be introduced to the IRA (a similar proposal is also made to the Employment Act 1950) which prohibits an employer from discriminating any employee on the grounds of gender, religion, race or disability with respect to the employment or the terms of employment or the conditions of work of any such employee. The exception to this is that if the distinction, exclusion or preference is based on the inherent requirements of a particular job, then the employer cannot be said to have discriminated against the employee.

The proposed amendment will therefore expand the jurisdiction of the Industrial Court to hear complaints of employment related discrimination.

The penalty (other than imprisonment term, which remains the same) for non-compliance with the Industrial Courts’ award under the proposed amendment has been increased to RM30,000.00. Currently, non-compliant parties are only given a fine that does not exceed RM2,000.00 which is considerably low and may not be an effective deterrent.

The proposed amendments to provisions relating to trade unions are, inter alia, as follows:

The proposed amendments have the potential to bring about substantive changes to the employment landscape, in particular the disputes regime.

For example, employees have the right to redress discriminatory practices by employers which was a right that was hitherto not available to employees working in the private sector, and any redresses can be dealt with by the Industrial Court with less delay as the Minister no longer has the discretion to decide whether to refer cases to the court.

However, such amendments, if adopted in its current form, may also bring about unintended consequences. For instance, the ease of filing a complaint at the Industrial Court may lead to frivolous claims being made which may result in backlogs and unfair cost implications to employers. The amendments do not seem to address this issue. Further, the issue of discrimination, which is by nature a considerably complex issue, may not be appropriately dealt with without further clarity in the law. In addition, the amendments do not address what sort of relief can be granted to an employee who claims they have been discriminated against.

This article was written by Donovan Cheah (Partner) and Adryenne Lim (Legal Executive). Donovan has been named as a recommended lawyer for labour and employment by the Legal 500 Asia Pacific 2017 and 2018, and he has also been recognised by Chambers Asia Pacific and Asialaw Profiles for his employment law and industrial relations work.

Donovan & Ho is a law firm in Malaysia. Our practice areas include employment law, dispute resolution, tax advisory, corporate advisory and family law. Have a question? Please contact us.