Proposed Amendments to the Employment Act (2018) 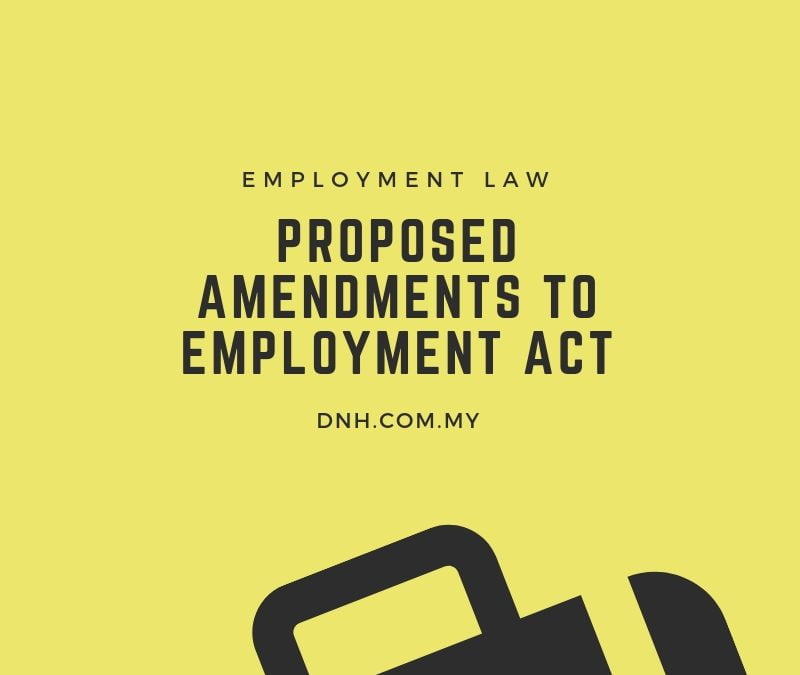 Amidst calls from the public to amend the Employment Act 1955 (“Act”) due to concerns about the inadequacy of the protections afforded under the law, the Ministry of Human Resources has finally released a list of proposed amendments, and is currently inviting members of the public to provide feedback on the proposals.

Here is a summary of some of the main changes to the Act that the Ministry is proposing. This article is based on the proposals released by the Ministry as at 4 October 2018 and may not address changes or amendments made to the proposals after this date.

Application of the Act

The proposals include making the Act apply to all employees, irrespective of the wages they earn or their job scope. Currently, only certain employees are covered under the Act, mainly those whose monthly wages do not exceed RM2,000.00 or those engaged in manual labour.

However, under the new proposals, certain provisions of the Act will not apply to employees earning more than RM5,000, such as hours of work, retrenchment benefits, and payment for working on a public holiday.

Definition of an employee

The proposals seek to make it clearer to determine whether a particular person is an employee or an independent contractor. A person will be presumed to be an employee if, among others:

The current Act does not explicitly spell out the factors that must be considered in determining whether a person is an employee, but instead (unhelpfully) just refers to employees as those under a “contract of service” without explaining much further. Whether a person is an employee (as opposed to an independent contractor) is sometimes the subject of contention as it determines whether an employer is liable to provide certain employment benefits. The inclusion of this presumption will aid in the legal determination of the individual’s employment status.

The proposals seek to expressly prohibit employers from discriminating job seekers or employees on the grounds of gender, religion, race, disability, language, marital status and pregnancy:

There are no similar anti-discrimination provisions under the current Act.

The proposed amendments require an approval to be obtained from the Director General before a job fair or carnival can be organised, failing which a fine of up to RM10,000.00 may be imposed.  “Job fair or carnival” in this context is where someone organises a programme to recruit job seekers for more than one employer.  As such, those affected will likely be service providers like headhunters and recruitment agencies. An employer is not required to obtain approval from the Director General if he wants to organise a job fair / carnival to fill up vacancies in his establishment.

The current Act does not address the issue of job fairs or job carnivals.

Under the proposed amendment, pregnant employees would be:

Currently, companies (termed as “principals” in this context) may be made jointly and severally liable to pay the wages of their contractor/subcontractor’s employees (as if that employee had been immediately employed by the principal and by the contractor/sub-contractor) where:

Under the proposed amendment, principals would be similarly liable where a contractor for labour (or commonly known as outsourcing companies) is involved.

The proposed amendments expressly allow employees to have “flexible working arrangements”. Employees who require flexible working arrangement may make a request to their employer who shall consider the request not later than 1 month from the date of such request, and shall notify the decision in writing to the employee. Nevertheless, the proposed amendment only requires employers to consider the employee’s request, and allows employers to refuse such it on several grounds, among which include:

Currently, the Act neither prohibits nor allows flexible working arrangements.

The proposed amendments also require employers to have a written code of prevention of sexual harassment and have it placed in a conspicuous area. There is no such requirement in the current Act.

Female employees under the current Act are prohibited from being employed in any underground working, or be required by employers to work in industrial or agricultural undertaking at certain hours at night (between the hours of 10 o’clock in the evening and 5 o’clock in the morning). The proposed amendments seek to remove this prohibition.

The removal of such prohibition under the proposed amendments is presumably on equality grounds; that female employees should not be treated as a vulnerable group requiring special protection.

Although there are some noticeable gaps in the proposed amendments, such as the exclusion of sexual orientation in the list of prohibited grounds for discrimination, some of the changes, if passed by Parliament, would bring our laws closer in line with international practice in terms of protection of employment rights.

What is obvious is that the proposed amendments, if passed in their current form, will have a significant impact on the way employers run their businesses. The increased applicability of the Act will mean that employers will have to review the terms and conditions of employment for all their employees to ensure compliance with the new requirements. Businesses should also expect to see a significant increase in operating costs, since a larger pool of employees could potentially be entitled to additional benefits such as overtime.  This could have the unintended effect of making some employees “too expensive to keep”.

This article was written by Donovan Cheah (Partner) and Adryenne Lim (Legal Executive). Donovan  has been named as a recommended lawyer for labour and employment by the Legal 500 Asia Pacific 2017 and 2018. He has written for publications such as the The Edge and the Star, as well as for the Malaysian-German Chamber of Commerce and Industry.

Donovan & Ho is a law firm in Malaysia. Our practice areas include employment law, dispute resolution, tax advisory, corporate advisory and family law. Have a question? Please contact us.

What is Pre-Action Discovery?
Fighting a Winding-Up
Share this article: