Developer’s Consent to Assign and the Imposition of Administrative Fee 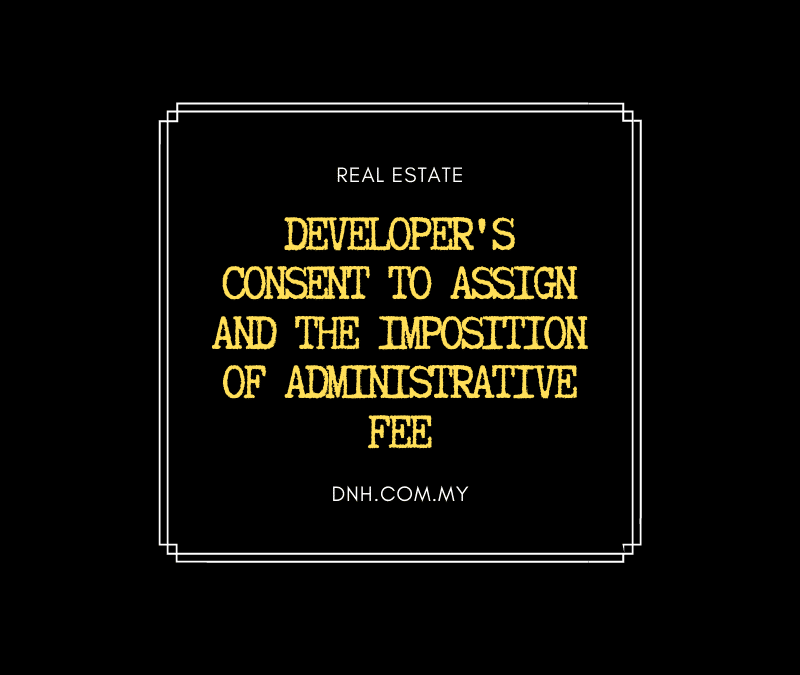 Not all stratified properties have separate strata titles: this may be due to the developer’s failure to make necessary application or that the application is still being processed. Thus, any dealings with such properties involving the transfer of rights and interests can only be done by way of a deed of assignment which, in some cases, require the developer’s consent before the property can be assigned to another party.

Although Section 22D of the Housing Development (Control and Licensing) Act 1966 makes it an offence for developers to require consent or to impose any conditions to the assignment, the act only applies to “housing accommodations”, that is, any building, or tenement which is wholly or principally constructed, adapted or intended for human habitation or partly for human habitation and partly for business premises. This means that buildings not covered by the act, such as office buildings, will require developer’s consent to assign.

As one of the conditions for giving their consent to assign, developers usually impose an administrative fee of 1% on the purchase price or on the value of the transaction (e.g. loan amount) which must be paid in order to obtain their consent. Though commonly regarded as market practice, the imposition of 1% can nonetheless be costly and unreasonable, given that the need for the consent is in some instances attributable to the developer’s failure to apply for the issuance of strata title.

Can we challenge the administrative fee amount?

In KAB Corporation Sdn Bhd & Anor v Master Platform Sdn Bhd [2019] MLJU 796, the Court of Appeal held that the administrative fee (1% of the loan facility amounting to RM 65,000.00) was plainly arbitrary, unreasonable, unfair and oppressive, and only allowed the developer to charge a nominal fee of RM 500.00.

What happened in this case?

This article was written by Shawn Ho (Partner) and Adryenne Lim (Legal Executive). Shawn leads the corporate practice group of Donovan & Ho, which has been recognised as a recommended firm for Corporate, Mergers & Acquisitions by the Legal 500 Asia Pacific 2018.  IFLR1000 has also ranked us a Notable Firm 2019.

Our corporate practice group advises on corporate acquisitions, restructuring exercises, joint venture arrangements, shareholder agreements, employee share options and franchise businesses, Malaysian start-up founders, property and tax, and can assist with venture capital funds in Seed, Series A & B funding rounds.  Feel free to contact us if you have any queries.