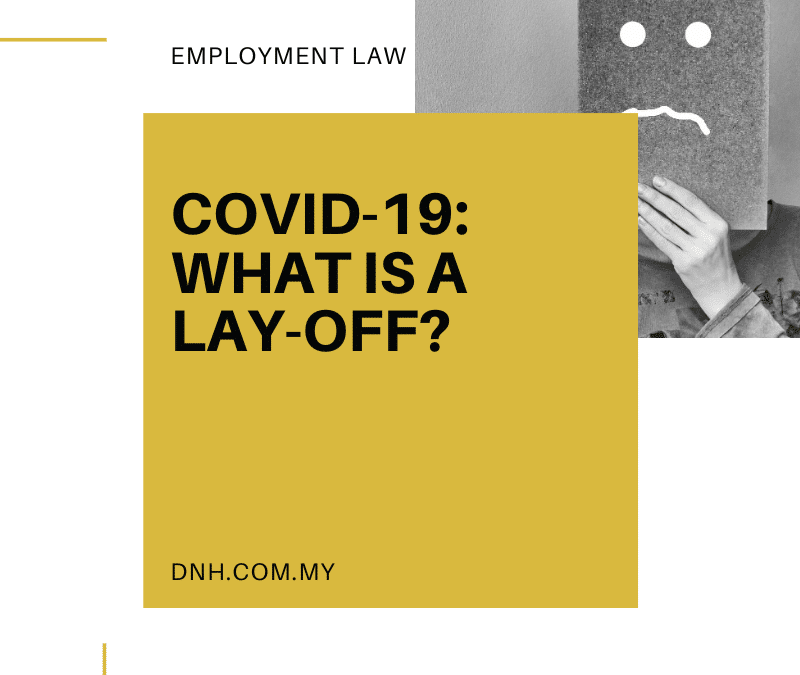 In the current economic climate, words like “retrenchment”, “downsizing” and “lay-off” are becoming part of our daily vernacular. Sometimes, these phrases are used interchangeably, although the concept of a “lay-off” is legally distinct from a retrenchment.

What is a lay-off?

Under the Employment (Termination and Lay-Off Benefits) Regulations 1980 (“Regulations”), an employee is deemed to be laid-off when:

The date the employee is laid off is the date on which the four consecutive weeks has expired.

However, rest days, public holidays, sick leave, maternity leave, annual leave or any other leave authorised under law shall not be taken into account in determining whether an employee has been laid-off.

The Regulations only apply to employees who fall within the purview of the Employment Act 1955, which primarily consists employees whose wages do not exceed RM 2,000.00 a month, or those involved in manual labour (“EA Employees”).

The concept of lay-off applies to an employee whose “remuneration depends on the employee being provided by the employer with work”. What does this mean?

This means that the employee must be someone whose contract provides that they only get paid for work done (e.g. employees whose contracts are piece rated or per assignment, or who are on a “no work no pay” contract).

It does not apply to employees who are paid a fixed amount on a monthly basis, because under those employment agreements, the remuneration would not be dependent on the employers providing work, as decided in Viking Askim Sdn Bhd V National Union Of Employees In Companies Manufacturing Rubber Products & Anor [1991] 2 MLJ 115.

There, the court held that the object of the Regulations is to ensure that employees whose remuneration depends upon the availability of work are not without an income for their needs during a period of lay-off. However, there is no need for such statutory protection for monthly-rated employees, since their remuneration is not dependent on the work received.

What happens when an employee is deemed laid-off under the Regulations?

EA Employees who are laid off as per the Regulations are statutorily entitled to lay-off benefits depending on their length of service:

Non-EA Employees are not statutorily entitled to lay-off benefits.

Since the definition of “lay-off” under the Regulations doesn’t apply to monthly rated employees or Non-EA Employees, what happens to these employees if they are told not to work and also aren’t paid their salaries?

This is equivalent to putting such employees on “unpaid leave”.  Forced unpaid leave requires the consent of the employees in order to reduce the risk of a claim for breach of contract and/or constructive dismissal. There is no requirement to pay employees any benefits for putting them on unpaid leave.

Is there a concept of “furlough” in Malaysia?

Furlough refers to a temporary leave of employees at the request of the employer, usually without  pay or with reduced pay, and due to economic conditions of the employer.  In certain jurisdictions like the United Kingdom, under a furlough scheme, the government will cover a certain percentage of workers’ wages if they are not working but kept on their employers’ payroll.

The phrase “furlough” is not commonly used in Malaysia. However, here, the government has announced an Employee Retention Programme, which is a financial incentive for applicable employees who have been put on unpaid leave by their employers, subject to certain conditions.

Is there a difference between termination and lay-off?

Yes. A lay-off does not involve termination of the employment agreement, since it refers to a temporary situation where an employee on a certain type of contract does not receive paid work for a period of time.  The employee remains an employee, but is not receiving work that would entitle them to get paid.

While colloquially, many use the phrase “laid off” to denote that a person has lost their job, it is important to understand the legal distinction between the phrases “laid off” and “termination”, especially for employers when communicating with their employees.

This article was written by Donovan Cheah. Donovan has been named as a recommended lawyer for labour and employment by the Legal 500 Asia Pacific 2017, 2018, 2019 and 2020, and he has also been recognised by Chambers Asia Pacific and Asialaw Profiles for his employment law and industrial relations work.

Donovan & Ho is a law firm in Malaysia. Our practice areas include employment law, dispute resolution, tax advisory and corporate advisory.  Have a question? Please contact us.

The Movement Control Order effects on Sale & Purchase of Property in Malaysia
Should I delay the 'perfection' of strata title?
Share this article: