Can the Court Order DNA Testing to Prove Paternity? 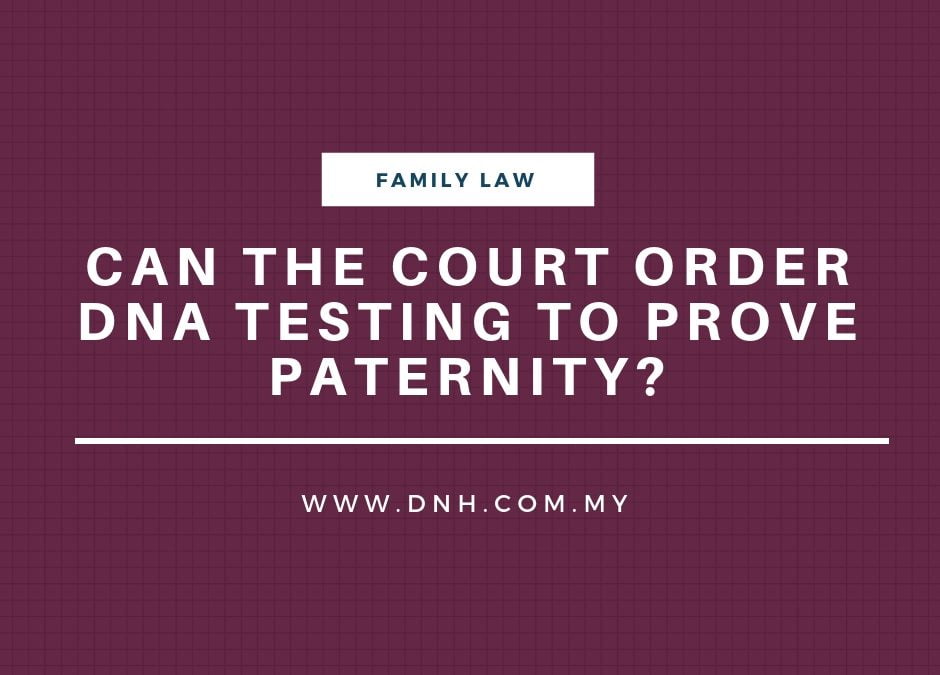 In this article, we examine the High Court decision of Lee Lai Cheng (suing as the next friend of Lim Chee Zheng and herself) v Lim Hooi Teik [2017] 6 CLJ 668 involving an application for the court to order DNA testing to prove paternity of a child.

The Plaintiff first commenced a suit in the High Court, and applied for the order by way of o14A of the Rules of Court 2012-an application which allows for fast disposal of the case on a point of law without the need for trial. Although the plaintiff was successful in the High Court, the decision was eventually overturned by the Court of Appeal as it found that the case was not suitable for disposal under o14A.

The case was then remitted to the High Court for trial, which was agreed by the parties that it should be taken in 2 instalments. The first was the determination of the question whether there is a prima facie case of close and intimate relationship between the plaintiff and the defendant and consequently whether the defendant should be ordered to undergo a DNA test. If both are affirmatively found, then the second instalment would be continued to determine the paternity of the child and the appropriate consequential reliefs. This article will focus on the court’s decision of whether the defendant could be compelled to take a DNA test.

The court said that it did not have power to order the defendant to take a DNA test because presently there are no statutes that empower the courts to do so. The court further said:

The above scenario is not the first of its kind that reached the court- similar attempts have been made in the past, but all had led to the same outcome. In essence, the court’s stance that it has no power to coerce an unwilling individual into taking a DNA test unless there is a law that expressly provides for it, has remain unchanged.

The court’s reluctance to make such an order may be attributed in part to the perceived invasive nature of the procedure. For instance, the court in Peter James Binsted v Jevencia Autor Partosa (“Peter James Binsted’s case”) said:

“In the case of a DNA test, it is common knowledge that either a blood, tissue or bone specimen will be taken from the person for testing. If a person refuses to submit himself to such a testing he is perfectly entitled to do so; a  person cannot be subject to hurt (i.e., suffer bodily pain, disease or infirmity) within the meaning of s. 319 of the Penal Code against his will by submitting himself to such test. Whoever carries out such testing without the person’s consent would violate s. 323 of the Penal Code for voluntarily causing hurt to the person and a court cannot, in the absence of a specific legislative provision, order such person to submit himself to an unlawful act to be committed on his person.”

However, it must be noted that the decision in Peter James Binsted’s case was made in the year 2000; it has been 18 years since the court handed down the decision whereby advances in technology have made DNA tests less invasive- in the sense that it is unlikely that the person taking the test will be subjected to physical injury as it can be done by using cheek swaps to collect cells from the inside of the person’s cheek (as opposed to drawing blood, tissue, etc.). This was in fact pointed out by the judge hearing the case (the judge hearing the 014A application which was subsequently overturned on appeal) who said:

“It would appear that with varying degree of requirements or stipulations, the paternity testing may be ordered by the courts in other jurisdictions. Likewise, we too must not be lagging behind but be robust and cannot allow our criminal or civil jurisprudence be shackled by the ghost of Peter James Binsted, which was decided within a narrow scope about 13 years ago. Much water has flowed under the bridge since then.”

What are the legal implications?

Under section 3(2) of the Married Women and Children (Maintenance) Act 1950 (“Maintenance Act”), “if any person neglects or refuses to maintain an illegitimate child of his which is unable to maintain itself, a court, upon due proof thereof, may order such person to make such monthly allowance, as to the court seems reasonable.”

In order to apply to the court for such an order, the person who is asking for the court’s assistance must first prove that the individual named as defendant in the application is the father to the child in question. Thus, having an order to compel an individual to undergo a DNA test would have facilitated the discharge of the burden of proof.

Having said that, this does not mean that the burden of proof cannot be discharged without a DNA test- parties can still rely on other circumstantial evidence to establish the paternity of the child. For example, in Lee Lai Cheng’s case*, in deciding whether there was prima facie close and intimate relationship between the plaintiff and the defendant that led to the birth of the child, the court took into account (among other things) the fact that:

Thus, it is still possible, albeit with more difficulty, to prove the paternity of the child for the purpose of applying for child maintenance order under the Maintenance Act without the aid of a DNA test.

(*Note that after finding that the plaintiff had established a prima facie case, the court then ordered for the second instalment of the trial to be proceeded. However, the decision of the 2nd instalment has not been reported yet)