5 Things You Should Know About Probationers in Malaysia 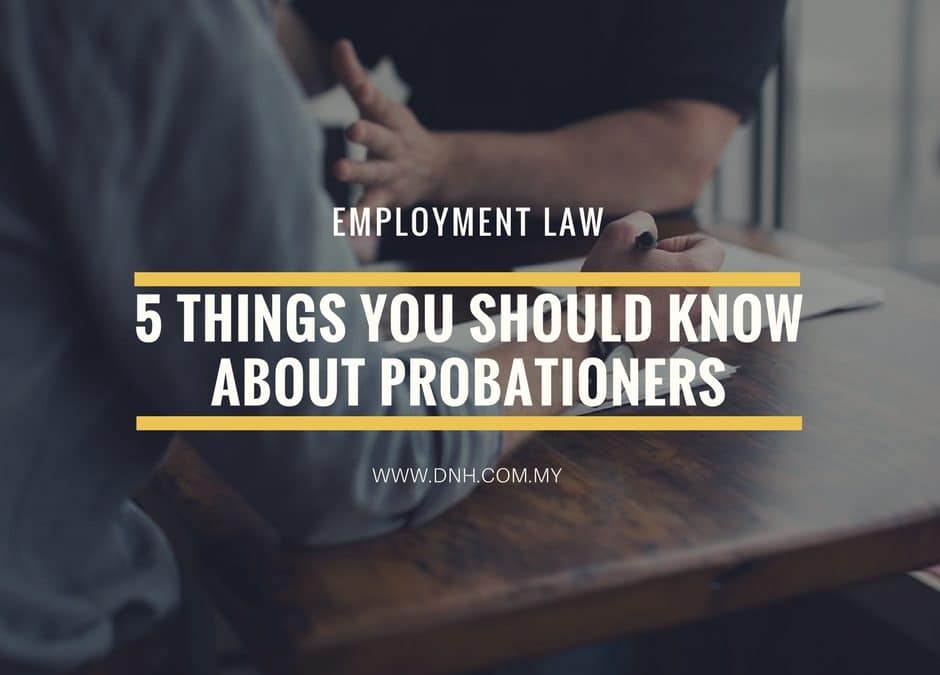 #1 : The term ‘probationer’ is not defined in the Employment Act 1955 or in the Industrial Relations Act 1967.

There is no statutory definition of what is a “probationer”. However, case law does distinguish between a confirmed employee and a probationer. Broadly speaking, a probationer is a new employee who is going through a ‘trial’ period in an employment to prove his/her fitness for the position which was offered by the employer.

#2: A probationer enjoys the same rights as a confirmed employee. Therefore, a probationer’s service must not be terminated without just cause or excuse.

Like a confirmed employee, a probationer has a right to make a representation to the Director-General for Industrial Relations under Section 20 of the Industrial Relations Act 1967 for unfair dismissal if they feel they have been unfairly dismissed. The difference between a probationer and a permanent staff is in the remedy.  If the Court finds that his/her service is terminated without just and cause, the probationer is entitled to compensation in lieu of reinstatement of a maximum of 12 months’ backwages based on the last drawn salary. (Confirmed staff are entitled to a maximum of 24 months’ backwages).

While termination of a probationer must be with “just cause or excuse”, the law recognises that the standard of proof required of the employer is lower when it comes to probationers. This is because employers have a general prerogative to choose and organise their workforce however they see fit, subject to compliance with labour laws of course.

#3: A probationer continues to be a probationer even at the expiration of the probationary period, if at the end of the period, his/her services had either not been terminated or confirmed.

A surprising number of people actually spend years working for the same company without ever receiving a confirmation letter. These employees assume they have been “automatically” confirmed since their probation period was completed without any comments from the employer. This is actually a misconception as the law provides that a probationer remains on probation until he receives notice that he has been terminated or confirmed.  However, confirmation can be implied by conduct,  if the employer treats the probationer as a permanent staff (For example, giving him the same benefits that would be received by a permanent staff).  The importance of a confirmation letter should therefore not be underestimated.

#4: The employer has full rights to assess a probationer’s character, suitability and capacity as an employee during the probationary period. If the probationer is found to be unsuitable, the employer can terminate his/her probation in accordance with the terms of the employment contract.

Suitability of a probationer is not just based on work performance but also his/her conduct, behaviour and attitudes in relation to the position he/her is employed. With regard to work performance, the probationer is assessed in 3 broad aspects: – (1) Inefficiency; (2) Incompetence and (3) Ineptitude. (Samsuddin Mat Amin v. Austral Enterprises Berhad [Award No. 47 of 1974])

In a nutshell, the test is  “whether the probationer possesses the right skill, competence, temperament, aptitude, attitude and suitability which will entitle him to transcend from being a probationer to that of a confirmed permanent employee.” (Indra Devi Rajoo v. Everhome Furniture MFR (M) Sdn Bhd [2015] 2 LNS 0093)

#5: Generally, in order to terminate a probationer’s employment based on poor performance, it is good practice that the employer follows the following steps:-

If the probationer still fails to improve his/her performance after such steps have been taken by the employer, the Court would more likely to determine that the termination was with just cause and excuse.

About the author: Joanne Ong is an associate in the dispute resolution practice group of  Donovan & Ho.  She graduated with a LLB (Hons) from the University of Manchester and is an advocate and solicitor of the High Court of Malaya. She has worked worked on a wide range of dispute matters involving unfair dismissal claims, debt recovery, conspiracy, fraud, land, bankruptcy, insolvency and defamation. Have a question? Contact us.